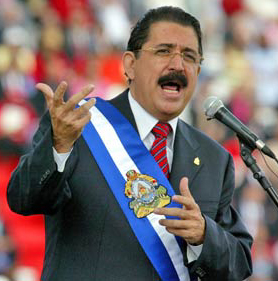 At the early hours of 28 of June 300 military enter the Honduras Presidential Palace, disarmed the Presidential Guard and arrest the President Manuel Zelaya. The President was quickly exiled to Costa Rica while the landlords Parliaments appointed a poppet president    , one of the richest men in the country.  The first word of the deposed President: this is a coup d’état not only against Honduras but the world? Is he right?

Why was ousted Manuel Zelaya?

In only 3 years after winning the presidential poll in 2006 Manuel Zelaya has being the champion of three major reforms in his country that made him powerful enemies. The first of his planned reforms is a land reform, necessary in a country where 7.000 people (around 0, 1 percent of country population) are owners of 80% percent of the land. The social problem in Honduras is dramatically, with 50% percent of the population below poverty line and unemployment of more than 1, 7 million people the situation is critical. The land reform program was destined to increase little farm, to support city poor from slams to engage in agriculture or alternative economic sectors. But the land owners fight with ferocity to blocked this initiative of President Zelaya as they opposed social program for building roads, sanitation and social houses in the poorest area of the country as they claimed this project where economic unrealistically.

Second project of Zelaya was the constitutional reform needed in a country with social problems, economical unfair system and under an oligarchy rule for more than 50 years. Let’s not forget that the current Constitution was forged under the watchful eye of the military dictatorship and was a condition of the military leaders to restore civilian rule after 20 years of military rule. Zelaya had tried to transform his country in a participative democracy with popular referendum, local’s consultation, extended presidential term and social and economic support for the poor. These changes in the constitution will empower president to make economical reform to improve the living standards of life in the poor stricken country.   The Honduras elite quickly turn into a trans-party alliance of the rich and started to plot the unseat of the president. The decisive moment was the announcement of a non-binding referendum that will prove to the world the Honduras people will for change and constitutional reform. As poll suggested that the referendum will give a more than 70% percent backing to the presidential plan  the opposition launch the coup d’état at the first day of the referendum and burn the ballot boxes.

The third project that created distrust in the President was the moral project, a campaign destined to disclose high pay for the official, to launch corruption enquiry in high state official fortune. This measure cost the president the support of his own Liberal Party made of influential characters many with strong economic ties, the board of the party decided that Zelaya is a loose cannon and a danger to his own party and redrew support for his projects.

If the coup d’état will work this will be a signal for Latin America that the old days of military dictatorship are back. Already there are frictions between the army and the head of state in Ecuador, Bolivia and Argentina. Bolivian president Evo Morales just survive an attempt to his life mounted by extreme right in Bolivia and a military plot was uncover in 2008. Venezuela’s Hugo Chavez was already a victim of a coup d’état attempt in April 2002 and Rafael Correa of Ecuador was also under threat of military intervention. If Honduras attempt will be a successful one will launch a string of military intervention across Latin America destabilizing the region. Already the European Union expressed a strong support for President Zelaya and Organization of American States expressed recognition for Zelaya as the sole president of Honduras. Strangely enough the US reaction was equivocal voicing only concern for Constitutional rule, an expression that the coup leaders will take as a support of the Constitution and Zelaya`s supporters also as a support of their call for democracy.  In the light of this feeble response questions are poring: was possible that the Honduras military, a long time allied of US to mount a coup d’état without Washington knowledge or consent? Was possible that leaders of the opposition with CIA connection did not ask for support and council for the CIA head quarter before moving to oust the president?  Only the future statements from the White House and a clear and sever condemnation of the coup leaders will fade away this worries.

The Honduras coup d’état is a threat to the stability in Latin America announced Hugo Chavez in Managua together with his Nicaragua, Ecuador  and Bolivia counterparts , also this was expressed by European Union representatives voicing support for the people of Honduras who rise against the military took over the country. Now the major issue is, will be Latin America strong enough and united enough to topple the military regime in Honduras? On this question the future of the region hang in balance.