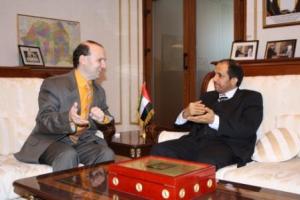 United Arab Emirates are celebrating on 2 of December the 38 anniversary of the Independence Day, a day of special significance not only for the Emirates but for the entire area of Arabic Gulf and Middle East. In these 38 years of independence the progresses registered by the United Arab Emirates under the visionary leadership of late Sheikh Zayed bin Sultan Al Nahayan and after 2004 under the His Highness Sheikh Khalifa bin Zayed Al Nahyan where outstanding. United Arab Emirates build in the region a climate of peace, equilibrium and economic and political cooperation and obtained achievements praised internationally. For Europe the connection with United Arab Emirates is one of the most important in the area, Europe appreciates the United Arab Emirates commitment in helping nations worldwide to achieve development, also Europe is praising the vision of His Highness Sheikh Khalifa bin Zayed Al Nahyan in constructing a leadership role in a new stage of development for the UAE that will witness the empowerment of his nation and its emergence on the global scene as a major world player.

Also His Highness expressed the Government’s commitment to strengthen the private sector, encourage investment projects, and expand in industry, tourism, construction while protecting the environment.  For all this reasons Europe considers United Arab Emirates a privileged partner in the Gulf Area and a country that will lead into XXI century. As a sign of respect for the splendid achievements of United Arab Emirates in this 38 years from independence, practically Europe will celebrate for all month of November 2009 the National Anniversary of United Arab Emirates, a day that many Europe are seeing as a day of a friendly country that is leading the way of development into XXI century and is considered in Europe as a long term strategic partner